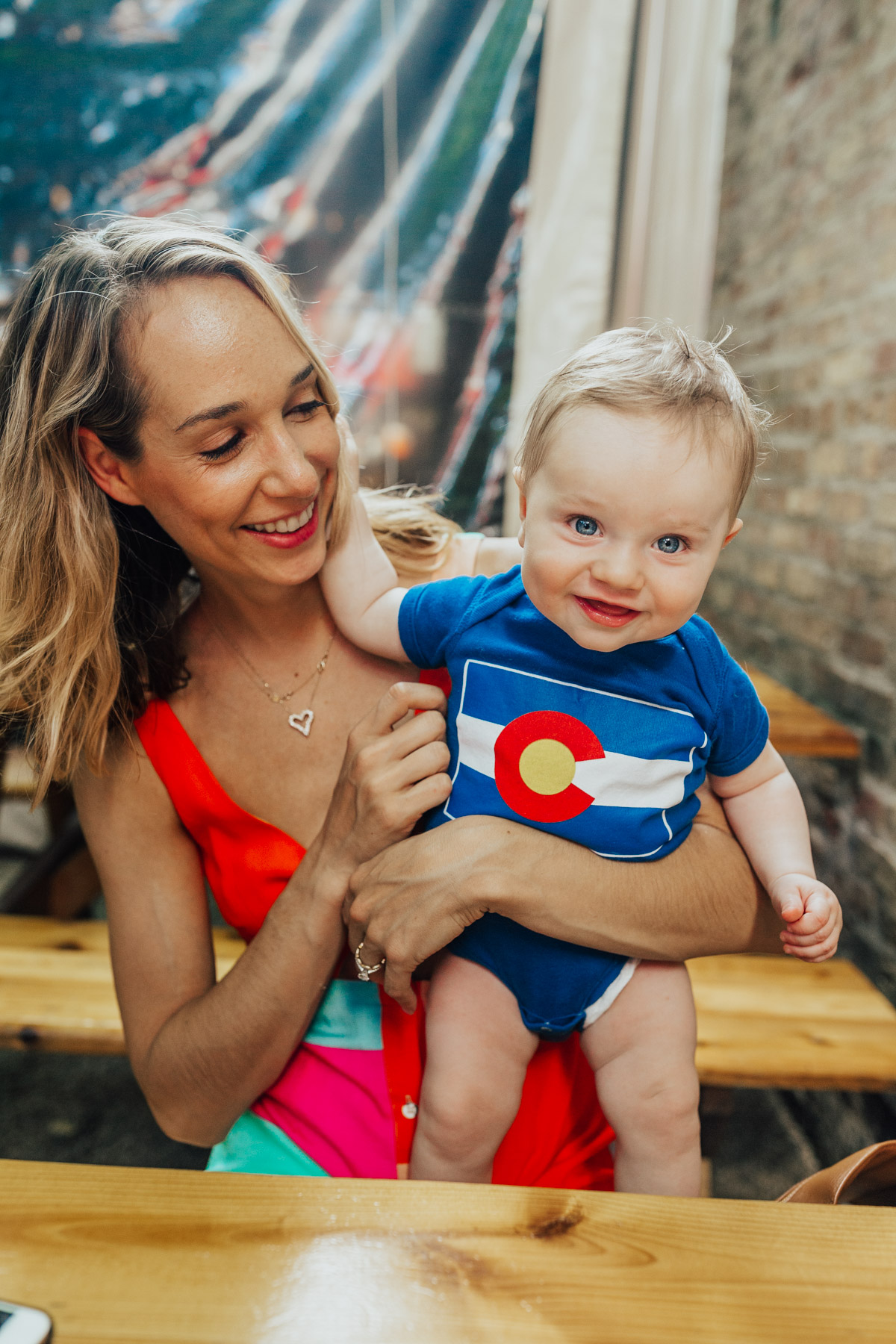 It’s been a long time since I updated you guys on Owen’s current schedule and a lot has changed since I posted this schedule at 9 weeks old. It’s hilarious to see how different he looks in such a short amount of time! I almost forgot that he was born with dark hair (and that it all fell out!)—it’s gotten so blonde!

Now that he’s older, I’m so thankful for implementing a schedule when we did. Of course, creating a schedule for a newborn is tough and it gets messed up everyday, but I’ve found that the more routine our days are, the better he sleeps! When he’s getting plenty of sleep, he’s less fussy and so much more fun!

I don’t worry if things shift 30 minutes to an hour, because it happens regularly, and I don’t want to stress myself out about stuff I can’t control. Around 6 months, we started introducing solids. I was all about the baby-led weaning until I tried it and realized how messy it is! So, instead of doing all BLW, we’re doing a combo. I typically feed him some purées, oatmeal or yogurt first and then give him some big chunks to explore. He loves chewing on them, but I’m not sure how much gets swallowed. Oliver has been acting like a vacuum when pieces of meat land on the floor, I just wish he’d eat fruit and vegetables too, ha!

I’m doing a bigger post on how we introduced solids, so I won’t go into too much detail here. But we do lots of purées of mixed fruits and vegetables, Siggi’s full fat plain yogurt (mixed with those purées) and oatmeal with banana and cinnamon in the morning.

He still drinks 4 bottles a day and is drinking mostly formula at this point. I stopped breastfeeding several weeks ago, and while I felt a little guilty, I’ve really been happy to have those hours back in my day. Also, I have so much more energy than I did before! Honestly, I didn’t realize just how much energy it took. Anyway, he’s getting some frozen breastmilk, though he’s started to reject it, so I try to mix it with formula so he’s still getting the benefits. We’ll see how long until he totally rejects it. We’re using HiPP Stage 2 and he loves it! Since we started using it, this has been the easiest for him to digest! This part of our day has gotten infinitely more fun! When he was a tiny baby, I was at a loss for what to do all day. It was freezing outside, so going for long walks was out of the picture and he napped so frequently, going to a museum was even hard!

Now, playtime is a lot more fun and lasts longer. In the morning, we read a book after his bottle, then he plays on the floor with his toys while I make myself breakfast. He eats his breakfast after that and then we play until he gets sleepy. A few of his favorite toys are this rolling fish and this Hape activity center that Kelly gave us! The fish has crinkly fins and a bell inside, so he’ll knock it around and scoot over to get it. It’s been great for encouraging him to crawl. The activity center is great when he’s sitting up or on his tummy and has different activities on every side!

We’ll also go to music class every so often, meet up with Shaheen and Zain, though that’s about to end since they move super soon (ugh, I’m so sad!), and go for walks now that it’s nice out!

As he gets more alert and moves more, playtime will only get more and more fun! Do you guys have any favorite toys or activities your baby loves? More recently, Owen’s naps have become a lot more predictable. His morning nap is almost always 1.5-2 hours long, which means I can do a few things like meditate and get some writing down as that’s when I find I focus best on those activities.

His afternoon nap is a little less predictable and always shorter. He usually sleeps for an hour to an hour and a half. If he doesn’t nap well, sometimes he’ll take a catnap from around 4:30-5:15, but it’s been a long time since that’s happened. If he’s fussy, but won’t fall asleep, I’ll pop him in the stroller and go for a walk and that usually gets him to fall asleep for a bit so he’ll eat better at dinner.

We’re lucky. People tell me this all the time when I tell them that Owen sleeps through the night, and I know it. I don’t take that for granted at all!

That being said, his good nighttime sleep habits didn’t happen on accident. Before he was born, I made it my mission to get that baby sleeping well as soon as possible. I read Babywise, Moms on Call and took Cara’s newborn sleep course (it’s online) and it worked. We did eventually let him cry it out to drop that middle of the night feed, and you can read more about that in this post. I’ve had lots of you ask about sleep regressions and Owen hasn’t really hit any. He had a few nights where he cried for 10-15 minutes, and we did struggle with naps for a while, but nighttime sleep has been pretty predictable. Occasionally he’ll wake up for 15-30 minutes in the night, but we don’t go in. Instead, we let him move around, find his comfy spot and put himself back to sleep.

We do feel lucky that he fell into a good sleep routine, but it wasn’t on accident. Other than keeping him fed and happy, getting him to sleep through the night was my top priority. I can’t say that following these steps will work for everyone, I know some people who have done everything “right” and their baby still struggles with sleep. But, it worked for us!

That’s pretty much it! It’s crazy to see how different his schedule is now versus at 9 weeks when I did my last post like this. We’re in a pretty good routine now and I think we’ll stick with this schedule for a while—until he starts eating more solids I guess!

I hope I answered any questions you had, but if not, leave them below and I’m more than happy to answer!

Totally random, but these pictures don’t really have much to do with his schedule, haha! We went to Sheffield’s on Father’s Day and snapped a few pics on Rob’s first Father’s Day. The pictures of them together just melts my heart!!

BTW, Owen’s schedule at 9 weeks, and the truth about loneliness and motherhood.

0 Comments • Join The Convo +
Previous
5 Nice, Yet Simple, Things You Can Do Today
Next
How To Dry Brush Your Body