I'm a web designer, SEO nerd, artist, mom and wife. Here I share tidbits of my life, recipes my family loves and my favorite products. If you’re following me on Instagram or Snapchat (thefoxandshe), you already know that last week I was in Iceland! It’s a country that’s been on my travel bucket list for a long time and I was so excited when I got the chance to go. It was a quick trip, but the flight was an easy one and our days were jam-packed so we got to see so much of the country in that short time. And let me tell you, it did not disappoint.

If Iceland isn’t a place that you’ve considered visiting, I think these photos might change your mind! It was easily one of the most beautiful and unique places that I’ve had the chance to explore and I’m already looking forward to another trip in the future with Rob. I wanted to go ahead and share an Iceland travel guide while it was all fresh on my mind. Hopefully this will make planning your own trip or stopover (I’ll explain this in a bit) that much easier! I know it seems like way too much stuff to do in three days — actually more like 2 days), but believe it or not, we actually did do all of this!

Icelandair now offers a direct flight from O’Hare to Keflavik, the airport just outside Reykjavik, and it only takes 6.5 hours to get there! One of the coolest things about this route is that you can make a stopover in Iceland on your way to Europe. Let me explain. Let’s say you want to go to Paris, but you’ve also really been wanting to go to Iceland. You can book your trip to Paris through Icelandair and when you stop in Iceland for your connecting flight, you can actually stay up 7 days without any additional airline fees! Yup, you read that right. It can make your total airfare a heck of a lot less expensive and make your trip that much more interesting! We stayed in one of many Icelandair Hotels called Icelandair Marina in Reykavik, just 45 minutes from the airport. As you may have guessed, it’s located on the marina and right outside the front door sits a working dock. Just across the street are several seafood restaurants including Kopar. This hotel was just a 5 minute walk to the quaint downtown area of Reykavik which is full of shops, bars and restaurants.

The decor was so fun too! I was obsessed with the bathroom tiles and the fish prints on the wall. If you want to do something a little fancier, they have another area called the Reykavik Marina Residences that offer a more personalized stay. Each room has a living room, large bathroom, bedroom and a small kitchen — perfect if you’re looking for something more special and unique. We got to walk through these rooms and they were stunning! Each one is just a little bit different than the next.

Since Iceland is growing so fast as a travel destination, they’re having to build a ton of new hotels to accommodate all of their guests. Things book up quickly, so make sure to book your hotel early! In Reykavik: tour downtown, Luthern church (make sure to go to the top for great views of the city), light house on the little island, old parliament house, Icelandic sweaters, just make sure to check the tags or ask where the products are made as some of them are from China.

SuperJeep Tour: On our second day, we did a full day excursion with SuperJeep.Is. We did this on our second day and it was definitely one of the coolest parts of our trip. We started early and headed out of the city early and didn’t return until about 7 that night. Along the way we saw the following things…

Geysir: After a quick stop off at a waterfall, we moved onto Geysir which is the namesake of all geysers. Iceland is known for its use of geothermal power and I have to admit I’m a bit jealous. Hot water and heat are incredibly cheap and plentiful since it occurs naturally. It’s pretty much impossible to run out of hot water.

Anyway, back to Geysir! The original geyser, where the name came from, has actually been dormant for years, but another one near by was going off every 5-7 minutes and was pretty incredible to watch. There were numerous other small pools of bubbling water all around the area and steam coming up from the ground in the cold air. It was like nothing I’d ever seen before! We stuck around to watch the geyser blow three times before heading on. 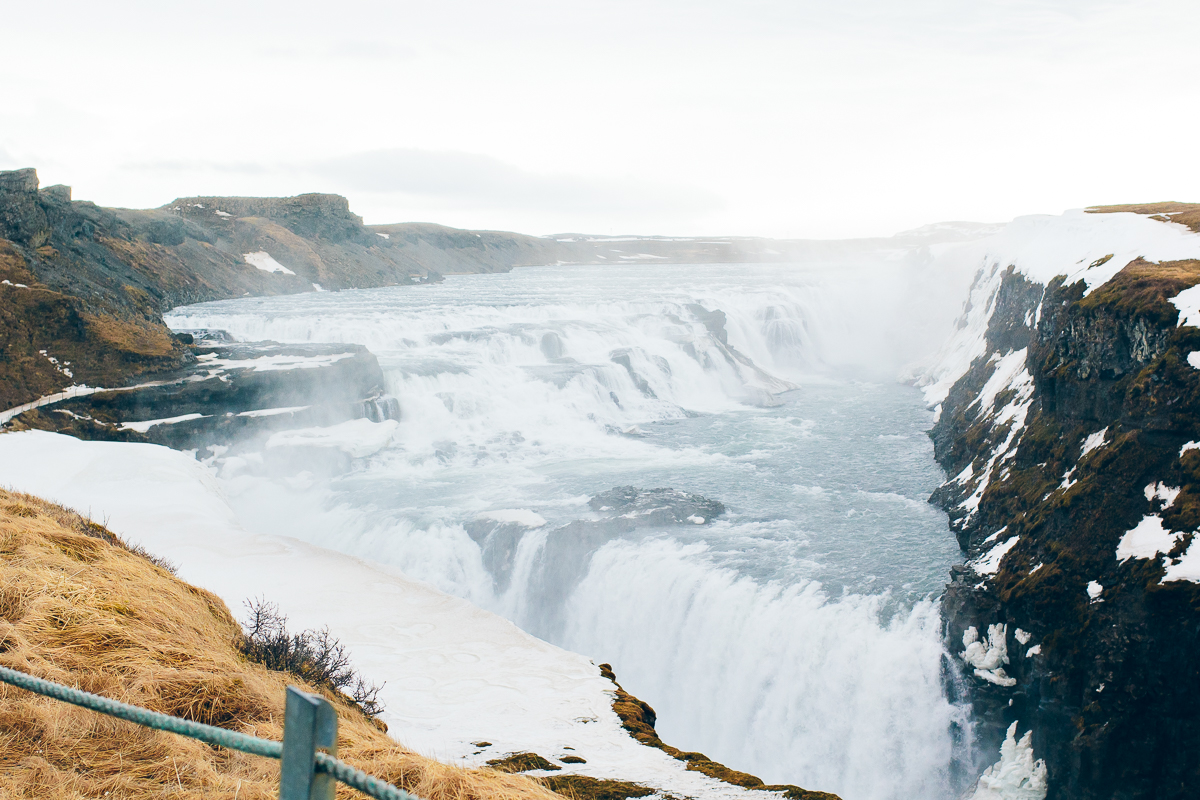 Gullfoss: The next stop was Gulfoss, a huge waterfall. This is most definitely the windiest place I’ve ever been. It was blowing so hard you had to literally lean into the wind to walk anywhere you wanted to and even then you could easily get knocked off the walking path. From a distance is looked like everyone was stumbling home after a long night at the bar, ha!

It was overcast the day we saw it, but I can only imagine how amazing the blue water would look when the sun was shining. Since it was so windy, we didn’t stick around too long, but I was glad we made a stop here, it was beautiful!

The Golden Circle: After that we just drove around in The Golden Circle. In the summer, the snow melts and the golden grass can be seen in every direction! This part of the trip was really unique, but also not for someone who gets motion sickness, like me. In the summer, the snow would have been melted and this would have been a lot more tolerable, but in the winter, it’s a bumpy ride. Despite getting carsick, it was still really unique!

When we stopped to turn around, the view was crazy.It was all white in nearly every direction and insanely windy — I can only imagine this is what the tundra sort of looks like! Icelandic Ponies: Or horses as the locals say, but they’re pretty small, so I’m calling them ponies. We stopped off on the side of the road to snap a few pictures before lunch and pet these gorgeous creatures. I won’t lie, this was one of things I was most excited to see, ha! They’re super sweet and friendly and seemed pretty used to being photographed. Speaking of photos, I’ll be sharing way more pictures of these cuties soon because I think I took at least one hundred, sorry I’m not sorry.

Thingvellir: It’s here that the crest of the Mid-Atlantic Ridge comes out of the water and where the North American and Eurasian tectonic plates meet. It was pretty incredible to see that view and walk between the two. If you climb up to the viewpoint, you get a great view over the largest natural lake in Iceland, Thingvallavatn.

Blue Lagoon: Pools are super popular here and they’re heated naturally by all that geothermal activity. It smells like sulfur, but has healing properties and feels amazing! I’ve mentioned it before, but I love a good face mask and you can do one here. It’s sort of like a swim up bar (which they have too!), but for masks! First, you put on the silica mask and let it dry for 10-15 minutes and then rinse it off and apply the algae mask that helps with fine lines and firmness and let that one dry for another 5-10 minutes.

We left feeling so relaxed and our skin a bit smoother! On our way out, all the girls picked up a face mask duo to bring home and I’ve already used it a few times, it’s so good and you can actually order it here. Since Iceland is surrounded by water, the seafood is top notch here and especially fresh, so if you love seafood, you’ll be in heaven! Lamb is also another common thing to see on the menu. Another thing you’ll see on menus? Horse and whale. Before you judge the humanity of it, consider that Iceland is an island very far away from other countries and for years they had to live off of what they had and that was it. If you’re an animal activist, consider yourself warned. Side note, chicken and pork were rarely seen on menus.

Grillmarkadurinn: Our first night here, we ate dinner at this cool restaurant in Reykjavik. Part of it was underground which was cool. I love the decor, especially the big wood slab tables and moody lighting. The seafood was great! I had the seafood duo which gave me a nice taste of three different types. Our hosts ordered the horse which tastes a bit like gamey beef tenderloin.

Lunch at Kryddlegin Hjortu: It’s located in Reykjavik and was the perfect place for a quick stop off for lunch. The food was not necessarily Icelandic, but had a great healthy soup and salad bar that hit the spot.

Lunch & Ice Cream at Efstidalur : We stopped for a late lunch at this adorable dairy farm restaurant on our day trip around The Golden Circle. For the most part, the menu consisted of a lot of burgers! The meat was fresh from the farm and really delicious. The restaurant part of the building was upstairs and overlooked the dairy farm, and from the ice cream shop downstairs, you could peek in and see the baby calves napping and eating. They also made incredible fresh ice cream that we grabbed on the way out. The salted caramel was so delicious!

Lava Restaurant at Blue Lagoon: After our bath we went to lunch at the Lava Restaurant on the property and had an amazing lunch. Seriously, this was probably the best meal we ate the whole trip — langostinos and fresh cod followed by a delicious and beautiful dessert! The restaurant is built straight into the side of the wall and is stunning. If you’re spending a day here, you can eat in your robe after floating in the lagoon!

Tapas Barinn: Adorable tapas restaurant in Reykavik, not very Spanish, but really yummy small bites in a cool atmosphere. Make sure to get the beef skewers with pesto and pan-fried mushrooms with goat cheese! The Blue Lagoon was our last stop of the trip and the perfect one to leave after. We were all feeling clean and relaxed when we boarded our flight. One major thing we didn’t get to see was the Northern Lights. They’re best seen on a clear winter night and the night we left they could be seen, bummer! But just another excuse for us to go back! I’d also like to do a trip to the glacier, go whale watching and check out a few more pools because felt amazing!

A big, huge, gigantic thank you goes to Icelandair who made the trip possible. It was such a quick trip, but I was super thankful for the opportunity to go and I’m already looking forward to going back. It’s such a beautiful country with a unique terrain and history and is 100% worth adding to your travel list.

Have you been to Iceland before? If so, let me know what other things I should add check out the next time we go! If not, is Iceland on your bucket list?

P.S. I lived in these Hunter boots I picked up right before we left. They were the perfect shoes for the wet, cold weather and I’m so glad I decided to buy them at the last minute!